Home / health and wellness / Turmeric and Curcumin for Your Dog’s, Cat’s Health

Turmeric and Curcumin for Your Dog’s, Cat’s Health 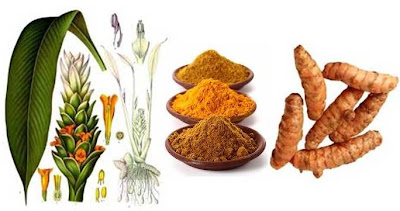 Adding Turmeric (Curcuma longa) to your dog’s, cat’s daily diet can provide your dog and cat with a vast array of health benefits.

1. Turmeric and Curcumin – a Brief Overview
2. Health Benefits of Turmeric
3. Health Benefits of Curcumin
4. The Dog Food Industry and Turmeric
5. Adding Turmeric or Curcumin to Your Dog’s, Cat’s Daily Diet
6. Choosing an Appropriate Product – what type of turmeric to use
7. How to Store Turmeric and Curcumin
8. Cautions and Drug Interactions
9. Additional Information on Herbs and Spices For Your Dog, Cat
10. General Guide to Daily Intake of Herbs and Spices

Turmeric, a spice is derived from the root of the Curcuma longa (also known as Indian Saffron), a perennial plant of the ginger family. The exact genesis of the plant is not known as the plant’s original origins are lost in the history of ancient trade; however it is likely that the plant originated in South East Asia or South Asia. 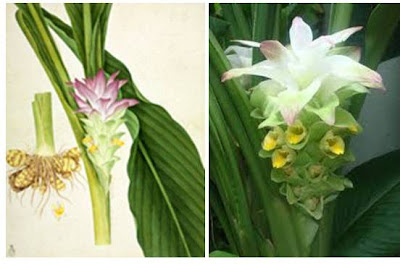 The Curcuma longa’s root system includes oblong tubers – similar to those of the ginger plant. The tubers are boiled or steamed, dried, and then ground. The resulting powder has a pungent slightly bitter flavour.

Although dogs have a much better sense of smell than humans – a dog’s noise has a minimum of 300 million olfactory sensors to our paltry 3 million, the dog’s sense of taste is less than ours (a dog averages 1700 taste buds whereas a human has 9000 taste buds). This means that the slightly bitter taste of turmeric is not off-putting for the majority of dogs. My dogs and cats have turmeric mixed into their food daily. 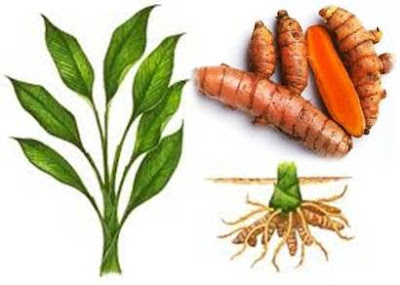 The scent of turmeric is reminiscent of oranges and ginger. Once it is dried and ground into a powder the scent is slightly bitter and medicinal.

Turmeric is a deep, warm yellow-orange color. The rich colour of turmeric comes from a naturally occurring pigment in the Curcuma longa tuber – the pigment is called Curcumin. Curry gets its colour from curcumin and some of its flavour from turmeric. Turmeric is a mainstay of India dishes and is also used as a substitute for saffron. 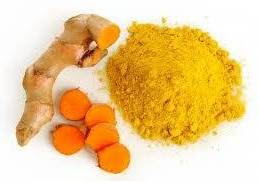 This revered spice has been used as a dye, flavouring and medicine since 600 BC. Turmeric is a very important spice in India – its use dates back 4000 years to the Vedic culture. India is the main source of the world’s supply of Turmeric, China and Indonesia also grow and produce the spice.

Curcumin is thought to be the principal pharmacological agent in turmeric. As an ancient medication turmeric was used in traditional Asian medicine as a blood purifier, liver ailment mediator, for the healing of skin diseases and sores and wounds and as a stomach tonic. In Thailand turmeric was used as an astringent, anti-diarrheal agent, appetite stimulant, as a carminative, to treat dizziness, gonorrhoea, peptic ulcers and as a topical treatment to stop bleeding, treat insect bites, treat teeth and gums, eradicate ringworms and heal wounds. 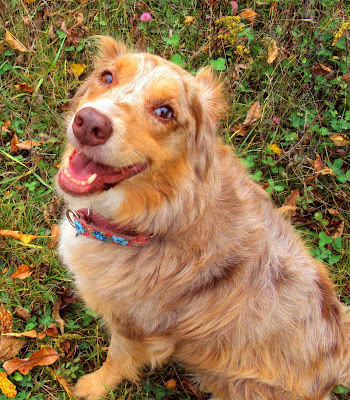 Today, turmeric is one of the most extensively researched herb-spices for pharmacological use. It is favored for its potentially beneficial use in treating and/or reducing symptoms linked to an extensive range of health conditions due to its excellent qualities as an: 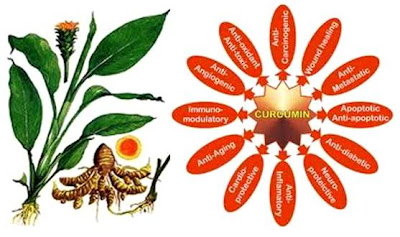 Turmeric has been shown to be effective in preventing and/or treating:

Other Health Benefits of Turmeric

Anti-Inflammatory – curcumin has been shown in numerous studies, to be comparable to the potent conventional medicines hydrocortisone, phenylbutazone as well as over-the counter anti-inflammatory agents. But unlike these conventional mendicants curcumin does not have toxic side-effects.

Cancer Inhibitor – due to its powerful antioxidant properties. Curcumin is effective in protecting colon cells from free radicals that can cause damage to healthy cell DNA – of particular importance as cell growth in the colon is particularly rapid. Curcumin also helps the body destroy mutated cancer cells thereby stopping the spread of cancer throughout the body. Curcumin enhances liver function – the liver is a primary toxin filter for the body, so enhancing its function supports health in many ways. Curcumin is also considered to inhibit the growth of the protein that is thought to be instrumental in triggering tumour formation. Curcumin has been shown to inhibit transcription factors (the ‘master switch’ that regulates genes required for tumor formulation).

Lower Bad Cholesterol and support Heart Health – Curcumin is a messaging molecule that communicates with genes in live cells. This active agent of turmeric directs cells to increase the production of messenger proteins that in turn direct the creation of receptors for LDL (Bad) cholesterol. An increase of LDL-receptors enables the liver to clear more LDL from the body.

Preventing Toxic Loading and Liver Damage– The liver plays a huge role in detoxifying the body. As dogs are exposed to ever increasing amounts of toxins in their diet (i.e. as found in many commercially produced dog foods and treats, dental care products – dental chews and toothpaste) and their environment (i.e. household cleaners, road salt, grass, shampoo etc.) the incidence of liver damage and liver failure is exponentially increasing. Turmeric boosts the ability of the liver to de-toxify.

Rheumatoid Arthritis – clinical studies have proven that curcumin provides highly powerful antioxidant effects as its ability to neutralize free radicals is substantial. Free radicals cause the painful inflammation and eventual damage to joints.

Defence Against Neurological Diseases of Old-Age – as curcumin is able to turn on gene codes for the production of antioxidant proteins it provides enhanced protection against some neurological diseases brought on by old age – i.e. canine dementia.

Weight and Metabolism Management–If your dog is overweight you might want to try adding either turmeric or curcumin to his/her daily diet…new research by the United States Department of Agriculture (USDA) has confirmed that curcumin helps to speed up metabolism.

4. The Dog Food Industry and Turmeric

Many commercial dog food manufacturers are now putting turmeric in their dog kibble. But please don’t be fooled by advertising – the inclusion of turmeric in commercially prepared dog kibble is not an indication that the kibble is a nutritionally balanced quality product.

The quantity and quality of the turmeric included in the food may be insufficient to have any positive effect on your dog’s health and worse – the turmeric may be of poor quality (i.e. grown with pesticides).

Turmeric is becoming a ‘hot word’ in the pet food manufacturing sector, just as ‘omega’ and ‘probiotic’. As the pet food industry – at least in North America) is unregulated pertaining to their use of terms vs. factual substantiation of actual quality/ratio of ingredient.

Manufactures rely on the ignorance of the consumer – profit before ethics. I have yet to see a commercially prepared dog kibble that includes the appropriate ratio of Omega 3 to Omega 6 fatty acids. Adding ‘probiotics’ to commercially prepared dog kibble is a ridiculous conceit as the heat required during processing of the kibble kills the probiotic microorganisms, thus rendering them useless.

So just as with omega fatty acids and probiotics – your best bet is to add turmeric directly to your dog’s diet – do not expect the trace amounts included in some dog foods to benefit your dog’s health. 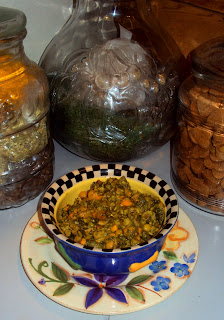 6.What Type of Turmeric (or Curcumin) is Best…
You can use powder (most commonly available), crushed or fresh root. I use the powder form (ground turmeric). The quality of turmeric varies vastly. Turmeric sold is in the typical grocery store and bulk food store is mass produced, grown with pesticides and herbicides and is, as a result low in beneficial potency. For maximum benefit it is best to purchase turmeric from a reputable supplier of high-quality organic turmeric. 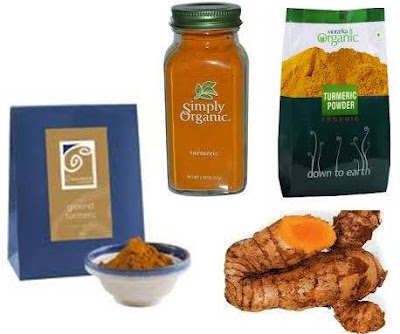 7.0 How To Store Turmeric or Curcumin 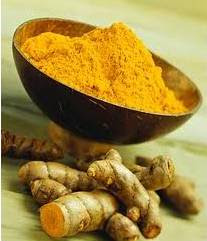 9. Additional Information on Herbs, Spices for Dogs Cats
You can read this article for:

If you require additional support and guidance I would be pleased to assist you via my Holistic Diet, Nutrition Wellness Services:

Benadryl for Dogs – Why I DON’T Recommend Using it