Dog Anxiety – Anxious Pacing Learn How to Stop It

Dog Stress and Anxiety – How to Turn Bad Stress to Good

Understanding the Psychology of Dogs – Learn the Basics

Let’s Talk About the Term ‘Alpha’

In reference to wolves, L. David Mech, PhD first coined the term ‘Alpha’, while studying packs of unrelated wolves. He has since done his utmost to convince publishers to stop printing his earlier works were he first defined the term Alpha. Alpha was a term developed to describe a dominate individual at the top of a hierarchical structure.
To quote David Mech…
‘The concept of the alpha wolf is well ingrained in the popular wolf literature at least partly because of my book “The Wolf: Ecology and Behavior of an Endangered Species,” written in 1968, published in 1970, republished in paperback in 1981, and currently still in print, despite my numerous pleas to the publisher to stop publishing it. Although most of the book’s info is still accurate, much is outdated. We have learned more about wolves in the last 40 years then in all of previous history’.‘One of the outdated pieces of information is the concept of the alpha wolf. “Alpha” implies competing with others and becoming top dog by winning a contest or battle. However, most wolves who lead packs achieved their position simply by mating and producing pups, which then became their pack. In other words they are merely breeders, or parents, and that’s all we call them today, the “breeding male,” “breeding female,” or “male parent,” “female parent,” or the “adult male” or “adult female.” In the rare packs that include more than one breeding animal, the “dominant breeder” can be called that, and any breeding daughter can be called a “subordinate breeder.”
And from another extract of Mr. Mech’s…’
‘However, in natural wolf packs, the alpha male or female are merely the breeding animals, the parents of the pack, and dominance contests with other wolves are rare, if they exist at all…The only consistent demonstration of rank in natural packs is the animals’ postures during social interaction. Dominant wolves assume the classic canid standing posture with tail up at least horizontally, and subordinate or submissive individuals lower themselves and “cringe” (Darwin 1877). In fact, submission itself may be as important as dominance in terms of promoting friendly relations or reducing social distance’.

So How About Domesticated Dogs?

Much like the wolf, the domestic dog has evolved genetically to live in social groups. Wolf packs in their natural state (not captive) consist primarily of related animals. The dog, however has lived with man for thousands of years and has adapted its social behavior to live with humans, in dog packs comprised of various breeds of dogs.
Dogs that live together in human house holds base their social structure on one of the three following social structures…none of these models include a pack leader. All three structures are dependent on dominant and submissive behaviors among the dogs as opposed to leadership by one dog.
One – Despotic Social Structure
A despotic (tyrannical) social structure occurs when one dog takes and maintains control of the other dogs – the other dogs submit to the despotic dog. This tends to be a fairly stable structure. However, it can be a less than desirable structure if the despot is practicing undesirable behavior…for example reactivity to guests…behavior is transferable and learned from one dog to another. If the despot is a well balanced dog – then there is no issue and the structure can be one of positive stability. 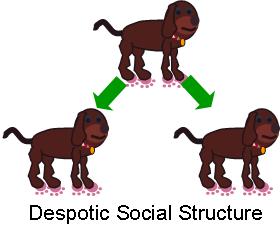 Three – Triangular Social Structure
A triangular social structure (not necessarily limited to three dogs – it can be comprised of more than three dogs) is a structure in which competition and fights for control of resources (for example food, toys, space) is constantly underway – this is a very unstable social structure. 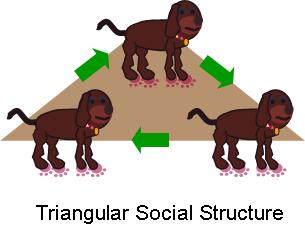 I live with a pack of eleven dogs. The dogs are not related by blood, they are instead a pack brought together by a human – most of my dogs are rescues. My dogs range in size from 4 lbs to around 75 lbs and are various breeds, and mixes, for example – Pomeranian, Chihuahua, Shetland Sheepdog, American Cocker Spaniel, Australian Shepherd, Boxer, Siberian Husky, German Shepherd (Alsatian) Belgium Shepherd (Groenendael) and Alaskan Malamute. 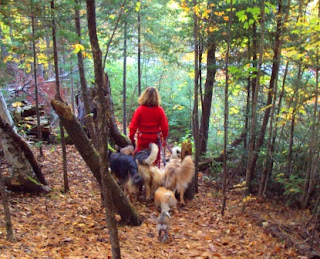 My dog pack’s social structure is linear because the leadership position is my role. It is my responsibility to coach and mentor my dogs to ensure that despotic and triangular behavior does not occur. Despotic behavior normally results from a lack of leadership on the humans part and is not – in my mind – a desired outcome as it can lead to issues and unwanted behavior. This is even more so for triangular social behavior as escalated and reactive behaviors become the norm.

My name is Karen Rosenfeld. I am an holistic diet nutrition health and wellness practitioner for dogs and cats. I am an holistic behaviorist for dogs. I offer a wealth of real-time, real-life experience. 30 years working and living with dogs and cats. Companion animals are my life, my work, my passion. Maintenance of Health Health Issues and Conditions Custom designed whole food diets, raw and cooked. Recommendations for commercial whole food diets. Consultations available worldwide via FaceTime, FaceBook video and voice, Skype, Phone and email Recommendation and specification of... Species Appropriate: Whole foods Treats Herbs Alternative medicines Supplemental foods Treatment and Remedy Holistic Behaviorist Services for Dogs Include: Obedience Training Behavior Modification Psychological Rehabilitation In-person Sessions Sessions available worldwide via FaceTime, FaceBook video and voice, Skype, Phone Affiliations to Companies None. I don’t sell food or supplements. I am NOT aligned with any companies. I prefer to select best solutions for my individual clients’ situation. My client services are available around the world. 🇺🇸USA 🇨🇦Canada 🇬🇧UK 🇦🇺Australia 🇪🇺Europe 🇨🇷Costa Rica and other Central American Countries 🇦🇪United Arab Emirates 🇸🇪Sweden and other Scandinavian Countries 🇸🇬Singapore and other Countries in Asia etc. Consultations and Sessions 📧Email: karen@ottawavalleydogwhispererer.ca 📞Phone: 1-613-293-3707 📱FaceTime 📱FaceBook video or voice 💻Skype 📖Holistic Wellness eBooks custom designed to suit 🚶In-person Sessions only available in Ontario, Canada.
@karendogwhisper
Previous Why Dogs Eat Grass
Next Establishing Pack Leadership 101 – be your dog’s packleader